On my way back from Home Depot armed with spraypaint for my journal experiment this afternoon I saw Superman. He was on rollerskates gliding down Figueroa in the opposite lane his cobalt blue spandex top clinging to him and emphasizing the fake muscle armor he was wearing underneath. He swung out across both lanes of oncoming traffic in a wide arc then squatted down and leaned into the curve coming about 2 feet from my open window. When he rose up from the turn he stretched his arms out behind him like a shiny pair of spandez wings then he gracefully rotated them towards the front. Classic Superman flying position complete with red cape flapping in the wind. He looked to be about 50-something, a big fellow, and on his head he had a glossy bouffant Elvis wig. I grabbed my camera out of my purse and took the first left to go around the block and catch him. I searched for 10 minutes in vain. No Superman. Where did he go? I drove through an alley and up and down several side streets. Nothing. An old fellow with a cigarette in his mouth had the hood up on his trunk. I asked him, “Did a Superman on skates just go by here?” He looked at me then turned back towards his truck without saying a word. This scenario is the exact reason why I love LA. You can be having an ordinary day going about your business and Superman can glide right by your window.

At 1:30 this morning I went outside and took a picture of the moon. I don’t know what compelled me to do this. I’ve never taken a picture of the moon before. Then this morning around 5:45 or so I went out on the front porch and got another one. I think they are beautiful. I felt just like that old man in Moonstruck who was mesmerized by the moon night after night. Remember him?

I got a photo of another graffiti poster today. HEARTS POUND. Mine did when I saw it. Superman AND a graffiti poster within 30 minutes of each other? No way! I’ll use this picture in an upcoming journal page.
Finally here are a couple of journal pages for the day. I’m enjoying the first Monday of my long vacation very much. We’ve got summer like temps here today in the 80’s. Tomorrow I’ll show pictures of the house I’ve rented for 2 weeks in San Miguel de Allende, which is in the Mexican Highlands north of Mexico City. My sister will meet me there for a week. I leave in 18 days.
I’m off to mask up the cat posse since they’ll be supervising the spray painting project. More on that tomorrow! 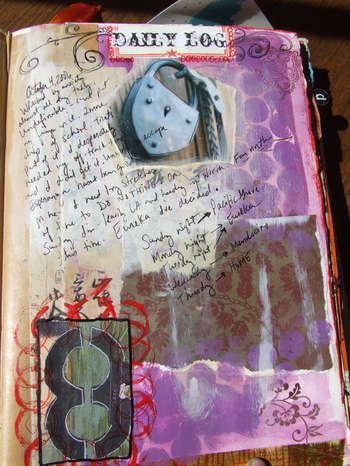